The European acceleration fund Seedcamp today announced that Monese has raised $1.8 million and joined the Seedcamp family. Monese is a London-based fintech startup that allows you to open up a UK bank account in less than 3 mins on your mobile.

Seedcamp participated in the $1.8m seed round alongside early Spotify investor Shakil Khan and a select group of other angel investors.

Monese has been licensed by the UK Financial Conduct Authority and will be launching in the UK during summer 2015. The startup offers a branchless and digital banking service that enables instant account opening via a mobile app, regardless of the customer’s missing utility bill. Helping expats, the company offers easy account opening, cheap payments and a debit card, taking the pain out and putting the honesty back into banking. Monese’s modern technology based on secure cloud technologies removes many of the barriers that legacy banking systems impose.

Seedcamp Partner, Reshma Sohoni stated: “Opening a UK bank account is a common problem that many expats and immigrants face. Our own international founders, employees, mentors, and investors have faced this issue. So when we met Norris and the team, we immediately understood the scale of the problem Monese is solving. The global movement of labour is only going to get bigger so there’s plenty of opportunity for Monese to grow. We’re excited to join them at this early stage of their journey.” 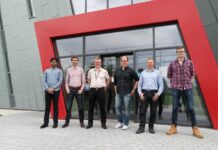 London-based LVNDR raises €1.7 million for its inclusive sexual health solutions for the LGBTQ+...

London-based Vector.ai raises €12.7 million to expand with its productivity platform for freigh...