Meet Inês Silva from Portugal, the Queen of Startup Pirates 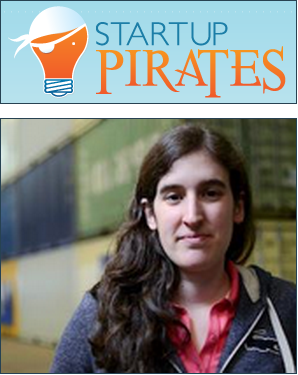 Recently, I attended a great business conference GoYouth in Lisbon, Portugal. Many great people, great spirit at the conference. One of the best business events I have attended in past years. TechCrunch called the city “it is like Berlin 5 years ago, with beaches”. Quite true.

In Lisbon, I met Inês Silva, an extremely active business woman, whose motto is “Disrupt or Be Disrupted”. Here is my interview with her:

Ines, it was nice to meet you at the great event GoYouth in Lisbon. Tell us, who is Inês Silva?

Great meeting you at GoYouth Conference. What an amazing event! So, I’m Inês Silva, an entrepreneur and community builder. Over the years, I’ve co­founded multiple startup initiatives, including Startup Pirates, Startup Tour and PortugalStartups.com. I’m also an avid TEDx organiser, a ThousandNetwork Ambassador and one of the youngest ever
graduates of Singularity University.

I see a lot of entrepreneurial spirit in Portugal, compared to many other European countries that I have visited. Why is that?

Over the past few years, we’ve seen a growing excitement within our startup scene. More and more people want to start their own companies or work in a startup. These days, being an entrepreneur is better than being a rockstar. We quickly went from not having a startup scene to having a booming ecosystem, with lots of startup players. I can’t identify one sole reason for that. The economic crisis was definitely a factor. But, the national and local governments and universities also played an important role in fostering entrepreneurship.

What are young Portuguese dreaming of? A stable corporate job? Doing business in London?

We are all dreaming about building startup unicorns. Farfetch, the luxury e- commerce platform was the first one, but hopefully more are on their way.

Techcrunch described Lisbon as “Berlin 5 years ago”. What is so hot about the city? Can you recommend us some cool places to work from?

Lisbon is sexy. The weather, great food and the people are great. Startup Lisboa is doing an amazing job supporting startups and has been able to attract lots of foreign founders too. The Lisbon Challenge is also putting Lisbon on the international startup map. If you want a great place to work for a few days, stop by Coworking Lisboa, one of the most active and successful coworking spaces in the country. If you are looking for something more geeky, stop by LINNK.

You co-founded Startup Pirates. What is the mission?

What are the next milestones or future goals of Startup Pirates?

We want to keep on growing to new cities and countries and this way help aspiring entrepreneurs to kick­start their projects. We see entrepreneurship as the best way to foster economic development and by democratising the access to startup methodologies and to an extended and international network of entrepreneurs we are increasing their  odds of success.

Can you name one or two promising Portuguese startups that you like most right now?

Talkdesk –  a “call center in the browser.” They recently raised €2.5M from very well known VC’s in Silicon Valley. Another one is Veniam that is building the Internet of Moving Things. They turn vehicles into WiFi hotspots. They recently raised a big round of financing from True Ventures and Union Square Ventures.

The startup Pirates team is dominated by women. Tech industry is male dominated and women are often overlooked. How to encourage young women to join the IT business party?

We first need to attract more women to the IT sector. There are already some very interesting initiatives in Portugal doing that, like Portugal Geekettes, Rails Girls Portugal and Portugal Girl Geek Dinners. We also need more role models like Cristina Fonseca, founder of Talkdesk and Filipa Neto, founder of Chic by Choice.