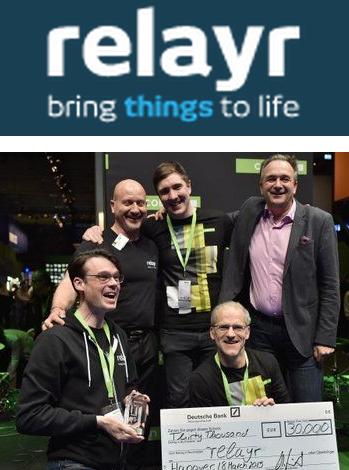 In January, we mentioned relayr in our list “5 German startups to look out for in 2015“, now the Berlin-based startup just won this year’s CODE_n Award at CeBIT in Hanover. The award carries a prize of € 30,000.

Over 400 startups had submitted their entries for the CODE_n CONTEST, which is divided into the four topic areas Industry 4.0, Future Mobility, Smart City and Digital Life. Before the decision was made, the Top10 CODE_n finalists had the chance to present their business models once again to the jury and hundreds of CeBIT fair visitors on Wednesday afternoon.

The young company impressed the judges with its business model that paves the way into the Internet of Things for app developers. Their flagship product “WunderBar” looks like a bar of chocolate but is packed with cutting-edge sensor technology. The various sensors measure such things as temperature, humidity or movement and can be broken off like chunks of chocolate and attached to physical objects. This enables software developers – without any knowledge of electrical engineering – to design applications for smartphones which can access and analyse the measured data; such as an app that controls the temperature of the wine cellar or the humidity level of the domestic greenhouse. Hardware and software communicate via relayr’s open sensor cloud platform and allow developers to make a fast and easy project start for wireless applications and prototypes – turning smartphones into smart devices.

“With relayr, the jury has chosen a company that perfectly embodies the theme of CODE_n15, ‘Into the Internet of Things’,” says Ulrich Dietz, CEO of the GFT Group and initiator of CODE_n. “‘Wunderbar’ makes it very easy for programmers to grasp and apply the Internet of Things (IoT). And this is also important, for although everyone is talking about IoT – especially at CeBIT – the perceived hurdles for developers are still very high. relayr removes these hurdles. A lack of hardware knowledge is now no longer an excuse. The simplicity of the solution and the implications for IoT left the jury in no doubt.”

MIT’s $1.6 million Future of Work Prize open for registration through 9 May

The Poland Prize – start and scale your startup in Poland (Sponsored)