With the latest version of CryptTalk, now released for personal use, anyone can easily maintain the security of their own mobile conversations and ensure privacy, even on the personal level.

CryptTalk, the premium call encryption service, recently became available to personal users. It now offers a standard package free of charge and a premium service package. The latest version of this award-winning application and technology was released by Arenim Technologies at the largest European technological event on the calendar, The Summit in Dublin. CryptTalk provides a 30 day free trial, offering the full feature set, during which users can get to know the benefits of the premium package of the call encryption service for a monthly fee of $9.99 – without any pressure to subscribe – or they can then continue to use the service free of charge in ’’passive or receiver mode”, meaning that they are still able to receive an unlimited number of encrypted phone calls and text messages via CryptTalk.

‘’The appearance of CryptTalk on the consumer market is a huge step forward in terms of mobile security. The fact that users can achieve the maximum level of protection after only two quick steps, downloading and registering, will bring about significant changes in the field of personal data protection.” emphasized Szabolcs Kun, the Co-Founder & CEO of Arenim Technologies.

‘’The new, personal-use version of the application offers the same level of protection as the PRO version provides to enterprises. Moreover, personal users can have a free trial period of 30 days and then they can decide either to subscribe to the full service with unlimited outgoing calls or to continue using CryptTalk in ”passive status”, which means they can still receive fully protected calls or messages from active CryptTalk users.”

At the end of the 30 day trial of our secure phone and anti-eavesdropping service, personal users can subscribe at a much lower price than our corporate clients can, this service costing only $9.99/month. For this monthly fee, unlimited free secure encrypted calls and encrypted text message are provided over Wi-Fi and mobile internet networks without additional per minute call costs. The application was designed in such a way that potential hackers won’t be able to break in, even if they had access to CryptTalk’s system plans or the source code. Even we, the developers of CryptTalk cannot gain access to private user data. ”The operation of the application only requires an internet connection and an iPhone or iPad. Based on the success of this latest personal-use version, we will consider expanding the application to other platforms; the next platform will be the Windows Phone.” said co-founder Szabolcs Kun.

After winning numerous prizes, in September 2014 Arenim Technologies was named one of the 40 most promising mobile technology companies in the world by CTIA (The Wireless Association). 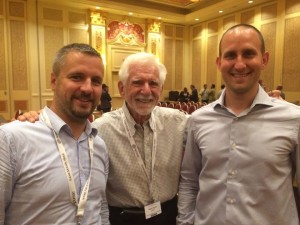 Background information: CryptTalk is a unique call encryption service developed by Arenim Technologies. The solution uses the most secure and widely accepted industrial technologies in order to perfectly secure phone calls and text messages. CryptTalk provides legal solutions which enable users to deny access to unwanted third parties hoping to hack into their personal and corporate communications. With its operation center in Stockholm and development center in Budapest, Arenim Technologies runs as a global IT company. By the beginning of 2013, CryptTalk’s voice engine had already processed over 100 million calls. In 2014, Arenim Technologies has won Central Europe’s best software development team award, and the CTIA ranked Arenim Technologies among the top 40 most promising mobile technology companies in the world.