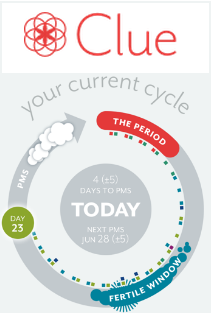 Clue, a startup which enables women to track their menstrual cycles via an app, today announced the closing of a new seed round, bringing the company’s total funding to €1 million.

The Clue app, which launched in July 2013, has already recorded over 20 million data points. The app helps women accurately track their fertility cycle. The Clue team is currently researching & developing technology that aspires to be an alternative to the birth control pill.

Clue has active users in over 180 countries and is currently available in English, German and Danish. The app has been ranked No. 1 in the Health & Fitness category in 28 different countries so far in 2014, including the United States, Germany, and the UK.

Clue also announced that Adam Wiggins, co-founder and former CTO of Heroku, has joined its Berlin-based team as interim CTO. Wiggins, who earlier this year served as an advisor to Clue, will help grow the development team and help scale the app through at least the end of the year.

“Clue has grown its active users by 400% in the six months since I signed on as an advisor,” said Wiggins. “This is incredible growth and I’m delighted to be working more closely with the team that made it happen.”