MiniBrake – to make cycling safer for kids all over the world 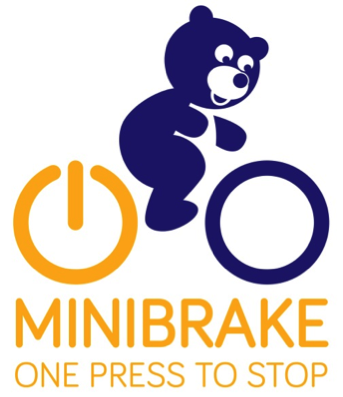 MiniBrake is a remote controlled bike brake system that is designed to protect kids. The device consists of two parts: a remote controller and a small brake attached to the rear end of the kid’s bike. Using the MiniBrake is as simple as it gets: when parents sense that their kid is in danger, they just press the remote controller and their child’s bike comes to a safe and smooth stop. Helmets, elbow- and knee protectors are extremely useful, but they can only mitigate the effect of a collision – in contrast, MiniBrake can be actively used to avoid bike accidents.

This might seem like a simple idea (why didn’t I think of it first?!), but to make it really safe, the developers built in important features to ensure maximum safety for kids. For example, if the battery dies, the bike is out of range, or a concrete wall blocks the signal between the remote controller and the bike, the brake automatically stops the bike.

The first thing that comes to everyone’s mind is ”won’t my kid fall over when I suddenly stop the bike?!”. This is a very important question, and the developers put great emphasis on solving this issue even if the child is going fast. The brake is applied to the rear wheel, not the front and it works by putting pressure on that wheel, so it comes to a firm, but safe and smooth stop within 20 inches (0,5 metres).

Another valid concern could be that letting kids learn from their own mistakes might be better than having them rely on the parent to intervene. The MiniBrake team also emphasizes that kids should indeed learn how to be self-reliant and it is necessary for kids to learn from their own mistakes. Thus, MiniBrake does not aim to replace teaching kids how to be careful on the road. However, there are always situations in which you do not want to teach your kid a lesson – you just want to intervene and avoid an accident. Using the MiniBrake does not take the responsibility off of the parents’ shoulders – it’s simply a device for the rare occasions when a dangerous situation calls for intervention. And in these cases, MiniBrake offers a great solution.

After 2 years of development, prototyping, and testing, the MiniBrake team has just finished their third round prototype that is ready for mass production. The team is running a crowdfunding campaign to cover the costs of the production line and the first series of the production. You can check out their pretty awesome campaign HERE.

„Parents experience that children aged 2-5 are learning new skills extremely fast. However, sometimes they are quicker in learning how to ride the bike than they are in perceiving dangerous situations. Or even if they notice a threat, they are not skilled enough to avoid accidents and stop safely. This feeling brought us the idea of MiniBrake two years ago”, says Marcell Szirtes, one of the founders of MiniBrake.

All three founders of MiniBrake are business graduates. Marcell Szirtes is responsible for marketing, Daniel Bognar for the finances and Peter Szesztay for the production. The MiniBrake team started off from a Hungarian business incubator, called Vállalkozzunk.hu. Other than the core team, there are 15 people working on the project now to finish the production line and start the production of the first series of MiniBrake.

MiniBrake was founded in 2013 and is based in Budapest.