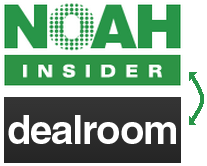 NOAH Insider, an AngelList kind of platform which has been launched by NOAH Advisors about a year ago, today announced its re-launch under the new name Dealroom.

The Dealroom platform provides investors and tech companies with a new way to connect and to share data. The design and fuctionality of Dealroom almost feels like a mixture of AngelList and CrunchBase. New features, like a custom watch list, are now making it easier to keep track of the companies you’re interested in. The search and filter functionalities have also been improved in the wake of the re-launch. The Amsterdam-based team behind Dealroom.co stated on their website that the successor to NOAH Insider is now completely unrelated to the corporate finance boutique NOAH Advisors.