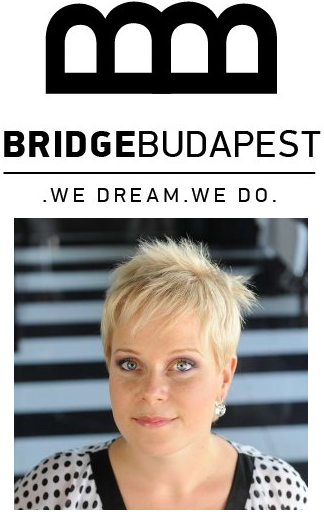 It was a lovely late-summer afternoon in Budapest when I met Veronika Pistyur, CEO of Bridge Budapest for this interview.

EU-Startups.com: How would you describe this initiative, what is Bridge Budapest?

Vera: Bridge Budapest is the non-profit foundation of the 3 most successful Hungarian startups – Prezi, Ustream and LogMeIn, created with the intention to prove that global success stories can be written also from this country.

EU-Startups.com: How does it work? What is the financial background for this?

Vera: We are covered financially by these 3 companies and Stephen J. Luczo, the Hungarian origin CEO of Seagate and are equipped with an amazing global professional network. We do not use any other resources, neither from the government nor from the EU, because we believe what makes the stories credible is that we have actually made these things happen ourselves.

EU-Startups.com: What are you actually doing?

Vera: The first project is the fully financed fellowship program which takes one to three months for Hungarian university students and journalists, to gain practical experience as interns at companies in the Valley and Boston. However it’s an exclusive opportunity for a limited number of chosen candidates, the whole application process was transparent – applicants needed to create videos that can be seen on Vimeo. Here are some examples: Péter Ungvári, Olga Kocsi, Péter Kadlót and Luca Szegletes. Winners will also create videos to tell about their ‘journey’. For this first year we have the budget of $300.000 on fellowships and highlighting some of the great business success stories from Hungary which will serve as inspiration to upcoming entrepreneurs.

EU-Startups.com: How did the application process look like? How many candidates did you have?

Vera: The first round of the program attracted about 200 students and six of them got selected. Applicants were required to apply by creating a video which took no more than two minutes and answer two questions: “What does internet mean to me?” and “What does ‘everyday hero’ mean?”

EU-Startups.com: And finally, would you say something about yourself?

Vera: I graduated from 3 universities with the degrees of “Television director and presenter”, “Cultural and Visual Anthropology” and “International Relations” and I am just about completing my DLA about the future of television.

I had been working in the world of television since 1997 when commercial TV channels launched in Hungary, throughout my own production company in the last 7 years, running programs about lifestyle and equal opportunity.

After leaving the world of TV behind, I joined an insurance company as the marketing executive to gain some corporate experience, building a completely new product, while also running a boutique communication agency.

EU-Startups.com: Thank you for your time indeed, and all the very best for Bridge Budapest and the new generation of entrepreneurs you are supporting.