Hemlis means “Secret” in  Swedish and is also the name of a new private Messaging App built by Peter Sunde, Leif Högberg & Linus Olsson. The team has also been involved in the Pirate Bay and the foundation of Flattr. The secure alternative to applications like WhatsApp will be free. However the Heml.is team will charge a small fee (via an in-app purchase) to unlock certain features.

Heml.is isn’t completed yet. The three founders are currently raising money to fund the development. They already raised about $83,000 of their $100,000 goal. Learn more about the project and watch the following video: 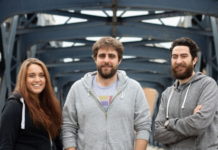 Kindaba secures seed funding from Skyscanner founder to disrupt the famtech market with its vis...

Deutsche Post has launched a free and secure messaging app

Dailymotion, Flattr and the dream of a socially funded video network