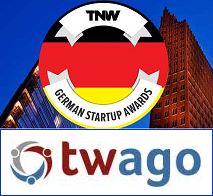 twago, Europe’s leading cloud working platform, was honored yesterday by Patrick de Laive, co-founder of The Next Web, with the award for the “best web app” in Germany in 2013. The Next Web, a well known online publications for the Internet and Technology sector, received 844 nominations for the “German Startup Award”. 35 companies were finally selected by a jury for seven different categories.

Besides twago there were other companies such as Earlybird, being honored as “best investor”, SoundCloud as “startup of the year”, EyeEm as “Best Mobile app”, Klash won in the category “best design” and Quote was honored with the award for the “best user experience” as well as Alexander Ljung as the “best co-founder”.

The Berlin based startup twago acquires jobs and projects from companies as well as small and medium sized clients on its platform. twago then offers freelancers and agencies global opportunities to work on these projects with maximum flexibility – online, every time and everywhere. On twago’s platform clients find programmers and designers as well as online marketing experts, translators, journalists or assistants.

Since 2010 twago has successfully acquired projects and jobs in the size of more than € 70 million. Clients have access to more than 180,000 freelancers, agencies and experts from 177 countries. The young company is already successfully operating in Germany, Spain, Switzerland, Austria and Italy. In November 2012 twago has also entered the French market. The comoany was founded in 2009 by Gunnar Berning, Maria Lindinger and Thomas Jajeh. In June 2012 twago completed its Series A successfully and received $ 3 million in funding.