lekiosk, the digital magazine platform (headquartered in Paris), has today announced that it has secured $7.1 million of Series B funding from CM-CIC and FSN PME CDC Enterprises. The news follows lekiosk’s 2010 Series A funding round in which the company raised $3.8 million from private investors and French investment funds Sigma Gestion and Promelys. lekiosk will use the investment to support its global expansion into Italy, while continuing to enhance the service in the UK and France via the addition of social features and apps for new platforms.

Across the regions it has launched in, lekiosk has been downloaded 700,000 times, has 100,000 paying users, and 30,000 people subscribing to its bundle. In France lekiosk was the highest grossing iPad app in the App Store in 2011 and is on more than 1 in 4 iPads. The service launched in the UK in June 2012 and is today expanding into Italy.

lekiosk, which was founded in 2007, enables people to browse, sample and purchase titles from a rotating virtual newsagent – or kiosk – where UK users can find magazines from publishers including the BBC, Condè Nast, and Dennis. The app is beautifully rendered in 3D and currently makes 100 titles available to users, with more being added all the time. Much of lekiosk’s success comes from its innovative payment plan that allows consumers to purchase magazines on a one-off basis or as part of a subscription to its ‘10 magazines for £10’ monthly bundle.

Ari Assuied, Chairman of lekiosk said, “It has been a very positive year for lekiosk, following our UK launch and new deals signed with publishers including the BBC and Condè Nast. This funding will enable us to continue with our investment into the UK service, as well as our international expansion into new markets. We will also be using the funds to continue to develop lekiosk to make it a more social and interactive experience for users, as well as investing into our core platform strategy as we open up lekiosk to new platforms like Windows 8.”

Francois Collet, Director at CM-CIC Capital Privé, added, “We believe lekiosk is a company with huge potential: it has a win-win model, and strikes a perfect balance between monetizing content, giving publishers an additional distribution channel, and offering users a simple, intuitive and attractive experience. “

Check out lekiosk’s promotional video which they published right after their previous launch in the UK:

15 Marketing Tools to Boost Your Startup’s Growth in 2021

French edtech startup iconoClass, which lets students pay when they have a permanent job contra... 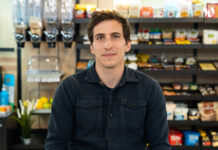 “Technology should not separate us, but bring us back together” Interview with Totem’s CE...