NOAH Advisors, a leading corporate finance advisor with a clear focus on Internet companies in Europe, just launched NOAHinsider – a platform that enables entrepreneurs, investors, and journalists to connect with others in the European technology community.

The brand new platform, which reminds a lot of AngelList, comes in a clean and user-friendly design. The ambitious project is a joint venture of NOAH Advisors and the New York-based web design company Dizzain. 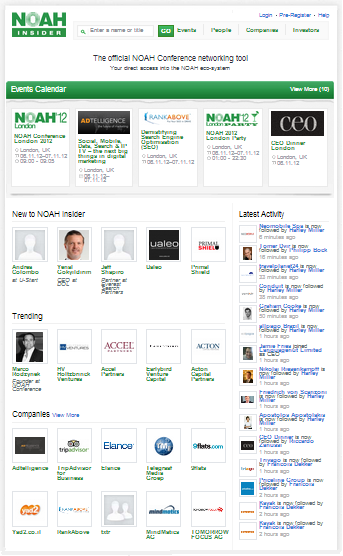 From NOAHinsider users can explore startups, raise capital, recruit talent, conduct business development, manage events and connect with expert advisors. The site quietly launched 3 weeks ago (it was initially used as a networking tool for attendees at the upcoming NOAH conference) and was already able to generate over 1,200 user sign-ups including 600 startups and more than 300 investors.

NOAHinsider is now also accepting applications from people who are not attending the NOAH conference and will be adding qualified members to the site on a rolling basis. We are excited about the project and whish NOAH Advisors and Dizzain a successful launch.

Focusing on 2 billion adults worldwide that are underbanked in financial services – Inter...