A successful start: The first edition of Porto Hackathon 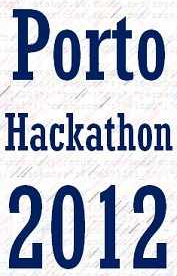 What do you do in August – while it’s sunny outside with up to 26° celsius? If you’re in Porto and not on vacation, you could have spend the last two weeks hacking for fun at Porto Hackathon. Its first edition is ending today and we have an interview scheduled with the winning team.

Planeta Virtual, a Porto based web development firm, promoted this first edition of an event where university students immersed for two weeks on code and put a complete application from the ground up. The participants came from 5 different universities and were divided into teams of three. Each team was tackling a different application challenge. Since the start on the 20th of August, there was technical training available, an all-time hands-on approach, a basic framework for a quick start, mentorship and lots of good will. And all this at no cost for the participants, as Globalmedia, a local professional training company, is providing the training with the financing of Portuguese Government and the European Union.

Sure, the concept of Hackathons isn’t that new. But the event “Porto Hackathon” could definitely be described as an innovation in Porto’s tech scene. The organizers are already planning the next edition, where they want to have more participants and enterprises joining the challenge with mentorship, sponsorship and application proposals.