Dailymotion, Flattr and the dream of a socially funded video network 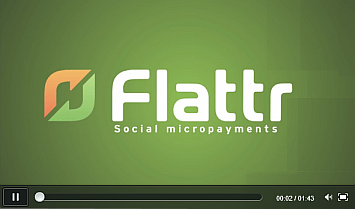 Dailymotion, one of the largest video portals in the world (over 100 million unique monthly visitors and 20,000+ daily video uploads), has just announced a partnership with Flattr – the Swedish micropayments platform – to create the world’s first global-scale, socially funded video network. Dailymotion with Flattr now allows individual viewers to directly pay online video creators for their content, opening entirely new avenues for amateur artists, musicians, podcasters, actors, and others to generate their own revenue streams and monetize videos.

Dailymotion and Flattr’s partnership embodies the largest-scale implementation of the crowd funded revenue model for online video to date, with traffic numbers and user volume substantial enough to establish social funding’s viability as the future of online broadcasting. Video creators on Dailymotion who are part of the Motionmakers’ program – the site’s premium content hub for users to upload their own HD content – can import a Flattr button directly onto their channels and each individual video (check out the instructional video at the end of this article).

Flattr users, who make a monthly donation ranging from a few dollars to several hundred, simply click to donate funds directly to the creator. Each month, the number of total donations from each Flattr user is calculated and payment is divided evenly among all recipients the user has chosen. Recipients also register for Flattr accounts to receive funds, which they can in turn donate to others as they see fit.

The recently announced partnership seems to be great deal – especially for Flattr. The distribution deal with Dailymotion, which is headquartered in Paris, gives the “microtipping”-startup access to a very large audience. Earlier this year, Flattr (which was founded in 2010) secured 1.6 million Euro in funding. The Malmö based startup was once described by Co-Founder Peter Sunde as “The like button that means something”.

Dailymotion stated it is proud to bring Flattr’s technology to the worldwide stage as the next step forward in monetizing social video in a medium that could transform the media industry as it exists today.

Linus Olsson (Co-Founder, Flattr) stated: “Dailymotion enabling Flattr for its audience and Motionmakers is great validation for our model and strongly engaged user base,”. He continued: “We hope this will change the way audience think about online video, encouraging viewers to donate to the creators of content that truly entertains, informs or serves a venerable cause.”

Compatible for anybody watching content on Dailymotion’s iOS, Android and Xbox LIVE apps as well, audiences can now donate through Flattr to Dailymotion Motionmaker creators anywhere in the world, any time, on virtually any device.

Thomas Ohr
Thomas Ohr is the "Editor in Chief" of EU-Startups.com and started the blog in October 2010. He is excited about Europe's future, passionate about new business ideas and lives in Barcelona (Spain).
RELATED ARTICLES
Startups by Country

“The traditional way of banking will be a rare event”: Interview with Pomelo Pay’s founder & CEO, Vincent Choi