ThirdPresence, a cloud-based mobile video platform, announced it has raised $800,000 in seed funding. The investment round was led by Jussi Heinila, a co-founder of Accelerando. Fellow angel investors include Matti Suokko (former Microsoft executive) and Olli-Pekka Kallasvuo (former Nokia CEO). Find out more about the Helsinki based startup on ArcticStartup.

Insight Venture Partners has just invested in the Berlin based startup DaWanda. The U.S. venture capitalist purchased over 35% of the shares. DaWanda, which is a marketplace for unique and handmade items, was founded in 2006. Insight Venture Partners paid previous shareholders several million Euros for their DaWanda shares. Read more about it (in German) on Deutsch-Startups.de.

The French online supermarket Houra.fr aims to generate €100 million in 2013 by selling food on the Internet. Houra.fr is a subsidiary of the Belgian Cora group. Houra has about 90,000 regular customers. Up to 70% of Houra’s sales (average order size is €220) are made ​​within the Paris region. Read more about it (in German) on ExcitingCommerce. 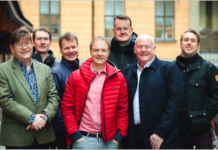