Home Denmark-Startups What the fuck is GoGlobal? 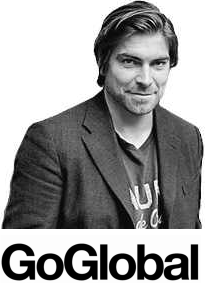 Morten Lund, a well known European entrepreneur and investor, has just pitched his new startup at the London Web Summit. Lund, who was an early investor in skype and today serves as a chairman at Tradeshift and Everbread, named his new project GoGlobal. He pitched his idea live in front of two investors out of the Web Summit crowd and offered them 10% of this new company for $3 million.

And his idea goes like this: GoGlobal will be a platform that helps Software-as-a-Service companies to go global. For example, the platfom will help young companies to find a local sales force in coutries they aim to enter. Morten Lund stated, that there is “an obvious lack of a smoothly functioning platform through which to orchestrate sales and service”. GoGlobal aims to take 3-4 companies into +40 countries every quarter. Lund announced, that GoGlobal already has 3 pre-signed clients.

Long story short, the two random investors Morten Lund live pitched his idea to didn’t invest. I guess Lund didn’t expect their commitment to invest anyway. Who knows – maybe these two investors will regret (in one or two years) that they didn’t spontaneously grab the chance to invest in GoGlobal. On the other hand, I fully get why they were this cautious. Not because of Lund’s big failure when he tried to build a free printed newspaper (in 2009, he was declared personally bankrupt), but more because of the ambiguities in relation to GoGlobal. To be honest, I didn’t really get from his speach how GoGlobal will work and what kind of platform he was talking about.

After I watch his pitch I tried to find out more about Lund’s new startup and found myself in the Vimeo channel of Morten Lund. My confusion increased while I watched his 3 recent videos about GoGlobal. Watch the video below as an example of Lund describing his new project. And then: Please tell me what the fuck GoGlobal is and does! 😉