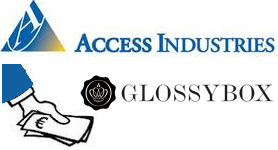 The simple concept of BirchBox and its clone GlossyBox is a subscription model (10 Euro per-month) for monthly sent beauty samples. GlossyBox was founded in March 2011 and its subscription based service is already available in over 20 countries (inlcuding Germany, France, Spain, Italy, UK, Brasil, USA etc.). Ealier this year, GlossyBox acquired MonCoffretBeaute.fr – a French website which (like GlossyBox) offers beauty samples on a subscription basis. This could enable Glossybox to play a more dominat role within the French market. A big competitor (not only in France) of the BirchBox clone GlossyBox is Joliebox, which secured 1 million Euro in October of 2011 and acquired the Spanish version of Birchbox (Glamourum) last month.

Rumors say, that the fresh capital from Access Industries will be used for a major roll out of GlossyBox in the U.S. market. By the way: Quentin Vacher (Joliebox, CEO) stated last month that his company (also) plans an expansion into the USA.