Flattr receives €1.6 million in a new financing round 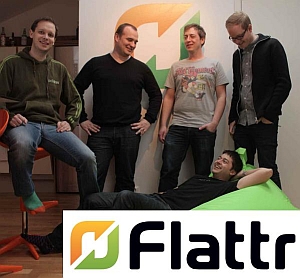 The Swedish “microtipping” startup Flattr has just announced a 1.6 million Euro investment from Passion Capital and the London based angel investor Federico Pirzio-Biroli. This recent funding values the young company now at 10 million Euro and will be used mainly to grow Flattr’s team and userbase. Flattr, which is based in Malmö, will continue to focus on some key markets in Europe (UK, Germany and Sweden).

Flattr was founded in 2010 by Peter Sunde and Linus Olsson. The startup enables content creators to attach/accept micro donations through a simple Flattr button on their website. During each month, Flattr users can tip as many content creators as they like to. The total amount a user has allocated to be paid out will then be devided between the content owners who received clicks during each month. According to the young company, its Flattr button is shown around 11 million times per day.

But not everything is fine right now at Flattr. As announced by the Swedish Supreme Court, th Flattr co-founder Peter Sunde faces 8 month in jail for his affiliation/complicity in relation to the Pirate Bay.

Sustainability: What it really means – from an investor perspective