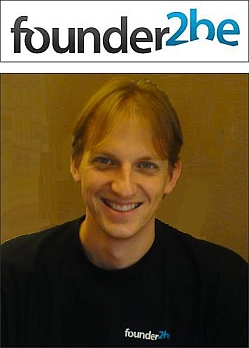 Yesterday we had the chance to do a short interview with Oliver Bremer, the co-founder of Founder2be.

Founder2be, which was founded in 2011, could be described as the match.com for finding a co-founder. The platform helps you take the first step of starting a start-up. Following the principle of “Everybody knows something, and nobody knows everything”. Enjoy the interview:

EU-Startups.com: When have you and your co-founder Frank Haubenschild had the idea for Founder2be and what made you sure it was the right one?

Oliver Bremer: In late 2010, I had this idea for a startup I wanted to start. Truth be told, I don’t even remember what it was because I never even got started. And the reason for that was that I never got very far all by myself and I never found a co-founder. And that was what turned my attention to the co-founder finding problem. While I was looking for one, I decided that this is actually a much more interesting problem to try and solve. I pitched this idea to pretty much the same people and it was Frank who said: Oliver, this idea is much better than the last thing you were talking about. Let’s start this together.

And so we did: We set out to create a place for people to find co-founders and start or join a start-up.

EU-Startups.com: What makes Founder2be unique or better than other social networks with entrepreneurial focus out there?

Oliver Bremer: The key is that Founder2be is not a social network. It’s not like ‘Facebook for entrepreneurs’ or anything like that. Founder2be is more similar to online dating. It’s the match.com for finding a co-founder.

A lot of people told us in the beginning that this can never work. I think they are wrong. If two people can meet online and eventually get married, then it sure is possible to meet someone to start a business with online as well. People apply for jobs online, and nobody excepts to get hired without an interview. So, Founder2be is a really neat way to expand your search for a team interested in the same thing and willing to work equally hard.

EU-Startups.com: How did you finance the startup-phase of Founder2be and who invested?

Oliver Bremer: We bootstrapped this all the way and are entirely self-funded. And this is how I recommend anyone to start a business. It helps you focus on what is essential. The other great thing is that we are in control and we can take our business wherever we want. Plus we did not divert any of our time away from product development and talking with our users and customers to discussing with investors. I strongly believe that if you do a good job and focus on adding value, then the rest happens automatically. And we are now seeing some of that with interested parties approaching us. And we welcome any interest in what we do.

EU-Startups.com: What were the main stumbling blocks during the development of Founder2be and within the first months after the launch?

Oliver Bremer: 24h in the day are not enough and we haven’t figured out a way to clone ourselves 😉 Jokes aside: I think we did pretty good with launching an MVP within one month from setting up the business. First Frank thought I was kidding when I said we need to ship within a month. But when he realized I was serious, we did ship in 1 month and 1 day. Of course, the first comments were ‘you need this feature, and that feature, and this one, too’ and guess what? Those three things were exactly the ones we would have liked to see included in the first release as well. So, it was good to get that confirmation from the users before actually spending time to built them. And two iterations later we had those three. And then there are plenty of things that you need to somehow get solved every single day. Nothing major stands in my mind right now. Every day problem solving is just what you do when you run a start-up.

EU-Startups.com: How many “Founders2be” are you counting right now and what kind of marketing strategies do you use in order to promote the platform?

Oliver Bremer: There are over six thousand ‘founders2be’ looking to get started. And it’s pretty much all word of mouth and has been picking up lately. That’s how it should be IMHO. Focus on doing a good job and the rest will happen. Of course, it helped when some of the blogs started noticing us as well. And now that we have pro plans we actually give users the option to also try these for free for actively telling their friends. So we are incentivizing the word of mouth that already worked well before.

EU-Startups.com: Are there any success stories yet of Founders that met each other on Founder2be?

Oliver Bremer: Yes, there have been a few. Most are unfortunately still in stealth. One that is public is Zilliot. I think the key thing to remember is that building a successful start-up can take a long time. And finding a co-founder can, too. Rewards comes to those that are persistent and don’t give up. Good characteristics for entrepreneurs basically.

EU-Startups.com: You are offering a Pro Plan on Founder2be. What are the main benefits of beeing a premium member?

Oliver Bremer: That’s right. With a pro plan we offer those things that make finding a co-founder easier. For example, no ads to distract you, advanced search functionality with which you can find a developer who knows iPhone and Android and who is looking for a startup to join in New York, let’s say, rather than any developer in a city who might be looking for help him or herself, etc.

EU-Startups.com: What are your midterm future goals for Founder2be and where do you like to see the company in about 1 or 2 years?

Oliver Bremer: Founder2be succeeds when we bring together teams that join or start startups in turn which they would not have done all by themselves. If or when we can make that happen for a number of startups which I can then also identify by name that would be great. And if one of those in turn becomes a success, that’s what we are striving for. And then, of course, it will be great to turn Founder2be into a profitable business on top of doing good and helping others.

EU-Startups.com: How is your experience with Helsinki as a location to start a company?

Oliver Bremer: Helsinki is a fantastic place to start a start-up. Finland used to be known for Nokia and now there is Angry Birds, who have their offices literally across the street from ours. Helsinki is a very innovative place. In particular, there is the Aalto Venture Garage that is part of the ecosystem of the Aalto Entrepreneurship Society. The team around Ville, Antti, Natalie, Miki and everyone else have done a tremendous job at building this ecosystem. Almost every week there are some of the best brains in the world coming here to help start-ups succeed. Just this summer we had Steve Blank from Stanford visit for an entire week! How did they make him take an entire week out of his busy calendar to come here? It’s amazing. So, a big thank you goes to everyone from the AaltoES.