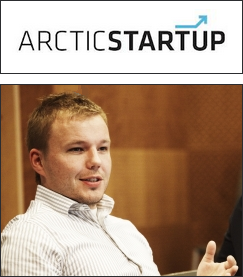 We recently had the chance to interview Antti Vilpponen, the Co-Founder and CEO of ArcticStartup.

ArcticStartup was launched in 2007 and is by far the biggest and most influential website reviewing and reporting on technology startups and growth entrepreneurship from the Nordic and Baltic countries. If you are curious about cool startups out of even colder countries like Finland, Estonia, Latvia, Lithuania, Norway, Sweden, Denmark (…and others) – we highly recommend you to visit the site on a regular basis.

Aside of the editorial work, Antti and his team organized a great event called Arctic15 this year. During the event, which was held in Helsinki, fifteen of the hottest (or coolest) Nordic and Baltic startups presented their companies on stage to the fanfare of 400 people from 11 different countries. Enjoy the interview:

EU-Startups.com: From what I’ve heard, Arctic15 has been a huge success with tons of great speakers and many visitors. What was it like to organize such an event and when is the next Arctic15 going to take place?

Antti Vilpponen: We organised Arctic15 for the first time this September. It was a great event and we really put a lot of effort into the smallest details of the event. We bent over backwards for our speakers as well and for example with the case of Steve Huffman, our keynote speaker, I personally made sure he didn’t have to get his wallet out during his stay. Another interesting detail in how we catered to our speakers is that we had a private, unlabeled taxi waiting outside and the driver went to get the speakers from the arrival hall. Once they got into the car, they were handed a wifi-dongle which enabled them to go online for free without having to build up roaming charges. We really wanted our speakers to enjoy themselves.

We’re naturally looking to build this into an annual event so Arctic15 will be organised in 2012 as well. We’re just putting the final touches on the concept and dates and hopefully we’ll be able to announce this early January. The event will take place in autumn 2012.

EU-Startups.com: ArcticStartup was started back in 2007 and has grown to be the biggest and most influential resource of news/infos about Nordic and Baltic startups. How many visitors counts ArcticStartup currently each month and what are your goals in terms of audience growth etc. till the end of 2012?

Antti Vilpponen: We reach about 45 000 – 50 000 people on a monthly basis. Most of these people are from the Northern European region, but naturally there are lots of readers outside as well that want to follow the Nordics and Baltics. For example, close to 20% of our readers come from Silicon Valley.

Another influential group of readers we want to cater to is the venture capital industry. Lots of VCs have stated to me personally that they read ArcticStartup, because it is the best way to keep your finger on the pulse of the startup industry in Northern Europe. Essentially we do, what no other media does.

We’re not looking to grow pure numbers – that’d be just silly. We want to reach the right kind of people as we grow and we believe there’s a more to the backgrounds and the kind of people that read us than pure numbers. So while we look to grow in 2012, there’s no clear figure we’re aiming for. Actually, we’re looking to add more value through a more diverse offering of content, etc.

EU-Startups: While reporting about startups, it seems as ArcticStartup has become a startup itself. Is this project your main occupation right now – and if not – do you think ArcticStartup could become a small but profitable business in the near future?

Antti Vilpponen: Actually, we founded ArcticStartup Ltd. already back in January 2009. Since then we’ve been growing quite nicely and there’s about a 100% growth to revenue compared to last year. We’re also profitable, but no dividends have been paid out. I also pay myself a very modest salary to keep food on the table. We try to put as much money back into the company to further grow it and seriously create a notable media company in the region.

I’ve been working full time with ArcticStartup since September 2009 when I left my other company I was a founding member at. Time is our most precious asset and it equals out the game for everyone – no one has more of it than anybody else.

EU-Startups.com: How many contributors write for ArcticStartup on a regular basis and what do you offer them in return for their volunteer work?

Antti Vilpponen: We have a few freelancers who write for us on a regular basis. We pay them a small compensation for their work and rights to the content. We also get contributions in the form of articles and for those we don’t pay, but give them the arena to voice their opinions. We’re very open for suggestions regarding articles.

EU-Startups.com: What is it like to be the Michael Arrington of the Nordic and Baltic startup scene? How much time do you usually invest in the project and how many e-mails do you receive on a daily basis?

Antti Vilpponen: I don’t consider myself Michael Arrington of the startup scene. Techcrunch used to be a site we looked up to when we started in 2007 and 2008. Since then I believe the quality of coverage has gone down quite dramatically and since the AOL acquisition things have turned really ugly.

My personal favorite among the tech press is Om Malik. He has a crisp clear focus on startups and yet he’s able to explain things in a very interesting fashion. I also admire what he has done with GigaOm as a media company, adding premium services such as research and events to the palette.

Like I mentioned before, I work full time on this (meaning 10-12 hours a day and sometimes half a day over the weekend). While much of the work I do never sees daylight, I’m constantly looking for ways to further extend our business and reading of similar experiences elsewhere. I like to dedicate my work over the weekends at strategical questions regarding ArcticStartup where as on weekdays I’m more into the operational side of things.

Depending on the day, but I probably get around 100 e-mails a day. I reply to all startups reaching out to us, even if they don’t fit our agenda. I let them know of it and wish them luck. I personally prefer e-mail over cold-calls as it enables me to reply to the person when I have time.

EU-Startups.com: Speaking of Michael Arrington. What is your policy on transparency and have you invested in some of the companies that get featured on ArcticStartup?

Antti Vilpponen: We’re very transparent about conflicts of interest. We haven’t invested in any of the companies we write about, even though I have a few advisory positions. I disclose these in my LinkedIn profile and also disclose them in posts whenever there’s a possibility of mixed interest.

What many people don’t get is that disclosures are a great way to market things you do. We also disclose any companies who took part in Arctic15 and in doing so also market the event.

EU-Startups.com: For readers that are not so familiar with the Nordic and Baltic startup scene: Which young companies would you recommend to watch closely?

Antti Vilpponen: I really can’t put one company before another, but the Finland has been very successful with gaming companies in the past and I don’t see that trend slowing down at all. There are a lot of cool companies in Sweden, Denmark and Estonia as well people should study closely. The best way to get an understanding is to read about them on ArcticStartup!

EU-Startups.com: How is your experience with Helsinki as a location to start a company?

Antti Vilpponen: Helsinki is a great place to start a company. Employment costs are a lot lower than in the Valley, but also governmental support instruments are readily available. There is also a growing amount of buzz and events taking place so Helsinki is truly living a golden age in terms of startups at the moment.

While we don’t quite have the weather of California, the people in the startup scene are warm and friendly and very educated. Helsinki is a great place to run your company from!