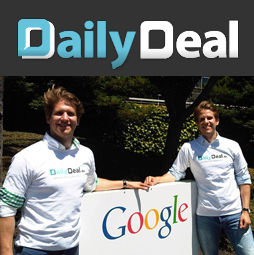 This Monday Google has announced the acquisition of the German deal website DailyDeal. Now we know more details about the deal: According to the latest German press reportings, Google paid about 130 Euro in “cash” to acquire DailyDeal.

The German Groupon clone was founded by brothers Fabian and Ferry Heilemann in Berlin back in December 2009. Since then, the deal site had seen tremendous growth, as people throughout Germany, Austria and Switzerland have used DailyDeal to find local deals on their favorite restaurants, travel destinations, entertainment venues and retail outlets. According to Fabian Heilemann DailyDeal has already surpassed Groupon in the Austrian market.

The young company has recently also announced its plans to expand DailyDeal to a wider European audience, with Scandinavia, the Netherlands, Luxembourg and Belgium as the next possible markets.