Home Germany-Startups Is Parship going to be overtaken by eDarling?

Parship, one of Europe’s largest online dating services, has recently dismissed about 10 percent of its workforce. The Hamburg (Germany) based company employs roughly over 160 people (15 of them had to leave now) and made ​​a turnover of 56 million Euro in 2009. In the near future Parship is going to focus even more on its core markets (Germany, Austria, Switzerland and the Netherlands) in order to compete against rivals such as eDarling. 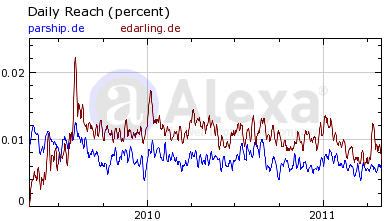 According to recent Google Trends- and Alexa-data eDarling has already surpassed Parship in their home market Germany. eDarling was founded in 2009 by the Berlin based Affinitas GmbH – wich is backed by Rocket Internet, the incubator of the Samwer brothers.